I have superposed two maps in this image. One is the Corruption Index perception 2014. And the other shows the most urbanized places in the world. Is there any relation? At first sight there seems no direct relation or correlation. But if we look with more attention, some relations start to emerge. regions with concentration of “light” (which I presume also suggest very urbanized and high level of electric light consumption) are among the most transparent and democratic. The U.S., Europe, Australia and a few countries in the southern hemisphere. On the contrary, places which are not necessarily less populated, but clearly do not belong to the western culture, are perceived as corrupt. The main issue I have here are twofold. One is that there seems to be a clear bias for western countries to suggest they are better. Secondly, we don’t really see the flow of resources among cities and regions. Because if we did, we would acknowledge the relations among corrupt and transparent cities and regions. After all, many of the economic functions and activities of firms are spread across the globe.

For various authors, democracy is hardly found on any map at the moment, not even in the Western countries. In fact, if you include the kinds of relations among countries, the map of corruption would  be another one: based on relations within countries and with areas outside. Corruption is therefore a relational. And it may be a set of relations which go beyond geographic boundaries. In fact, corruption may be leading some location decisions form firms across the globe. And for government to influence their policies. therefore its this flow of resources that attention must be placed upon, a kind of perspective that can be applied to cities. Cities as flow of resources, which are also part of accountable systems. Can we manage a flow of resources that creates accountability among cities? Would this be a new sense of sustainable urban development for example? 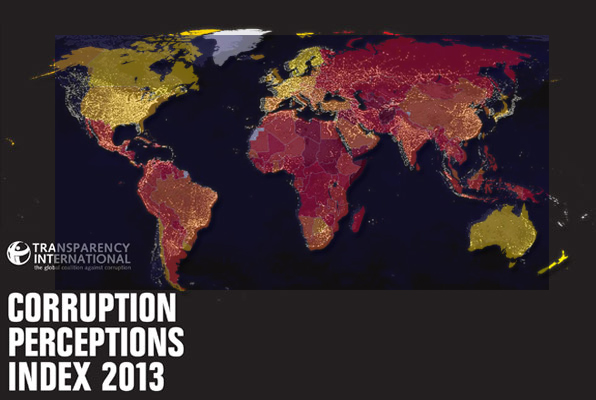 What does corruption mean to you?

“… dishonest actions that destroys people’s trust in the person or group”. (http://www.vocabulary.com/)

“dishonest or fraudulent conduct by those in power, typically involving bribery” (http://www.oxforddictionaries.com/).

“… the misuse of public power (by elected politician or appointed civil servant) for private gain”. (http://www.corruptie.org/)

it’s not a nice subject to talk about. But its crucial to understand why most places around the world are not democratic. In fact, where does this actually work well? in general my intention is to be aware of the elitism in decision making. One which, without transparency, may fall into corruption. I’ll take my time to develop this post, so don’t be surprised to see some changes!